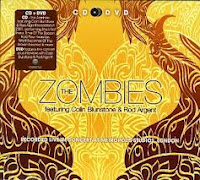 For a band celebrating 50 years together, the Zombies do not show their age on the DVD/CD package Recorded Live in Concert at Metropolis Studios, London (Convexe CVX902141). It's the band with original members Rod Argent on keys, vocals and compositions, Colin Blunstone on lead vocals, Jim Rodford on bass and vocals and relatively new (?) members Tom Toomey on guitar and backing vocals, and good drumming from Steve Rodford.

It's 70 minutes of together band performances in an acoustically sound studio with a small but appreciative audience, plus 10 minutes of interviews. The CD gives you all the music sans interviews.

What's remarkable is how good the vocals are--Colin Blunstone sounds great, maybe even a touch better than he used to, and the rest are in fine form. Rod Argent's keys have a prominent presence and solo role, as they always have, and there are some tasty guitar solos here and there.

They cover some of the iconic hits of the early days, "She's Not There," "Time of the Season" and some that we didn't hear all that much Stateside, plus some songs from the Argent days and Colin's solo career. Finally, we get a crop of brand new songs as well, and they are not bad, not bad at all.

This is early-classic-rock power-pop at its finest. They clearly relish playing together, even after all these years. And they make some kinetic magic here!