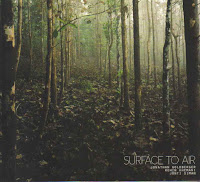 The influence of the band Oregon is with us still. And why shouldn't it be, since they along with McLaughlin did much to create an acoustic chamber jazz that showed some Indian classical roots but added a Western harmonic pallet and a mostly through-composed melodic lyricism of their own?

I suppose that's a rhetorical question, but never mind. Today we have a trio that clearly has gotten something from that new tradition and taken it somewhere along the way to a new place. I refer to the trio Surface to Air and their new self-titled album (NCM 40133).

Surface to Air is Jonathan Goldberger on acoustic guitar, Rohin Khemani on tabla and other eastern percussion, and Jonte Siman on the upright bass.

This is music that foregrounds acoustic guitar compositions with lively tabla and bass work. There is room for improvisation and it comes in where you expect it. Goldberger however is not the sort of guitarist that is going to wow you with 32nd note runs. He is subtle, a little different, and after an overall matrix, as is the band.

Aside from that fact that they are playing in this vein, the compositional frameworks and total feel is what makes this album well worth hearing.