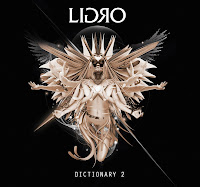 From Jakarta, Java, Indonesia, there's Ligro, a guitar-bass-drums fusion outfit that brings it on. Their first international release, Dictionary 2 (MoonJune 047), is at hand, and I for one am glad of it.

It's a fusion trio that has absorbed the Lifetime-McLaughlin-and-beyond legacy and made something of their own of it. This is music with bite. No small part of that is due to the playing of Agam Hamzah. He has facility, a great harmonic-fuse sense. He writes well too. And he can pace a solo with taste and drama, never at a loss for ideas. Adi Darmawan plays bass the way bass should be played in an ensemble like this--strongly foundational and rock solid, yet loose when called for and in no way cliched. Drummer Gusti Hendi has great chops, the independence to get the complex sounds that drive and goes his own way to boot, avoiding the repetitive formulaic approach and hitting it with full force.

It's a rather amazing debut. It's hard-hitting all the way but there's plenty of variety, even including an interpretation of Stravinsky's "An Easy Piece Using Five Notes."

It's a surefire winner for anyone who digs on advanced guitar wielding, the fused arts, and a hot trio going at it with music that rises above the repetition of accepted formulas to make something very much new out of it all. You are warned: things are happening musically in Indonesia today. This is an important piece of that and it should not be missed! Hurrah to MoonJune for bringing this to us.