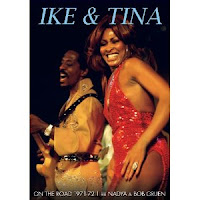 Without a doubt Ike and Tina Turner were doing some of the most exciting live soul around with their review in the later '60s-early '70s. Nadya and Bob Gruen got themselves a Sony video recording unit and followed them and their road ventures/adventures during 1971-72. The results are available as a DVD now: On the Road 1971-72 (MVD Visual MVD 5276D).

It's a cinéma vérité sort of affair. There are a few more formal sorts of conversations to be had but otherwise it's all about raw reality slabs (before that became stylized, fake and vapid with reality shows) of Ike and Tina at home, in the studio, in rehearsal, travelling with the band, in the dressing room and of course, on stage. It's not in sterling sound and the video equipment gave slightly primitive results, but you get some smoking live segments and a sense of how it felt to be on the scene then.

It's valuable footage, creatively conceived, and the music is great. It's a chance to go back and dig what they put across, what the road was about, what they were about. Yeah!