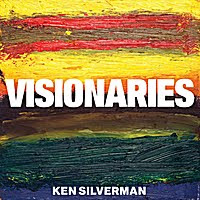 Ken Silverman is a guitarist that tends to lead more than follow. So when he does a solo guitar album it's not what you expect in the general run of things. At least that's very much the case with the new album Visionaries (SoundSeer 1002).

There are nine segments, each dedicated to a guitarist, artist, or musico-cultural force that has had impact on Ken Silverman's artistry in some way. So we have dedications to Blind Lemon Jefferson, Robert Fripp, Syd Barrett, and so on, each musical segment showing Ken's reaction/interaction with that influence. Acoustic and electric guitars, the oud, charago and synthesizer come in and out of the thread of expression as needed.

And in the end we get something valuable, original yet eclectically so, very unexpected at times and very confirming-affirming at others.

It's music! It taps into visions and in the process has a vision of itself. It's artistry that commands respect and attention.

And it's music that guitarists will find fascinating. And non-guitarists too.