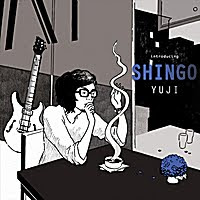 Not every guitarist sounds like every other guitarist, thankfully. Shingo Yuji, an up-and-coming talent, doesn't. His debut, Introducing Shingo Yuji (Yujipan Music) gives you some well played, well thought-out modern contemporary jazz. It's a trio affair for most of the album, with Dave Robaire and Dan Schnelle on bass and drums, in that order. They fit right in and get things swinging. Saxophonist Walter Smith joins on sax for the first two cuts and he adds a solid contemporary style to the mix.

The album mixes Shingo's creative and interestingly varied originals with a couple of modern standards and a traditional Japanese melody.

Shingo has his own fairly electric sound, full and driving. He gets a lot of velocity by hammering on his lines, yet he does NOT sound like Allan Holdsworth in what he plays or his tone. He also does on occasion some quite unusual and pleasing things with finger picking.

It's an promising first effort. He's an original in the bud, ready to flower.