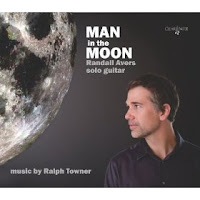 The face of improvised music changed with the advent of guitarist-composer-leader Ralph Towner, beginning throughout the '70s. His playing with the cooperative group Oregon and on his own solo projects gave the world a unique stylistic sensibility that continues to shape our musical thinking.

And his classical guitar technique was put to use in innovative ways when he took up that instrument. A composer of music that could only be his, he developed a body of work that many of us came to cherish.

Randall Avers was one. In fact he was so impressed with Maestro Towner's music that he sat at his feet, studying his guitar compositions and approach as his pupil for several years.

We can hear the results of this labor in the breathtaking recording Man in the Moon (Clear Note CN 74591) an entire program of solo guitar works by Towner, excellently played by Randall Avers.

It's not only that Randall has absorbed the Towner style completely, he has incorporated his own superlative phrasing, made it into something of his own, so to say.

This ravishing disc has some old familiar Towner works and some brand new. You come away from it affirming that Ralph Towner remains one of the key innovators in guitar music in our lifetime and that Randall Avers is uniquely disposed to give us performances of the music that will benchmark the standard of such things for many years to come.

Get this disk and you'll be ravished!

Posted by Grego Applegate Edwards at 5:50 AM