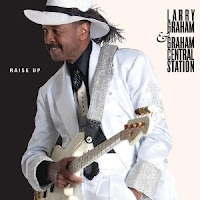 Those who were there or funk-o-philes of today will know Larry Graham and Grand Central Station as one of the best of the bands who came out of the Sly and the Family Stone mode--group vocals, tight band, solid song orientation. . .and Larry's patented funk bass guitar, which was an innovation that everybody copied.

Well they are back with a new album, Raise Up (Razor & Tie). And they are still doing it. The horns and rhythm stomp it off in fine fashion, Larry hits some slapping bass guitar grooves worth hearing and the vocals are right down the pipe. Prince guests on vocals for a few cuts and that sounds good, too.

Funk may be making a resurgence. And of course it never left in any event. This one doesn't break out into any new territory especially, though understandably the modern studio sound is there, and it has that groove in abundance. You dig the funk, you'll dig this one.