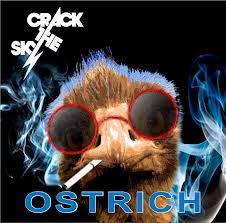 Time can sneak up on us and catch us napping. When a new CD by Crack the Sky came my way in the mail, I realized that I first came across the band in my music publishing days, when their first album came out, in, whoo, around 1975! To be honest by now I had forgotten the band just about entirely.

So don't ask me to remember what was on that first album. Ask away about the new one though, Ostrich (Aluminum Cat 99692). It's a snide view of life living inside some infectious combo power pop-rock.

The songs get to you and have plenty of girth and variety. The musicianship is very solid. The guitar players that solo are doing some nice things--there is more than one? I am not sure but if you know the band you can tell me in the comments and I will duly thank you for that.

It's like Steely Dan and the Talking Heads reinvented themselves as Crack the Sky. That's a fine thing, though before I heard this album I would not have known it.

Surprises can be good.