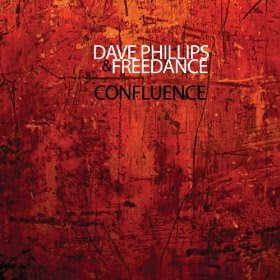 Acoustic bassist-composer David Phillips has been leading his unit Freedance off-and-on for a very long time now. He did a very nice album on Naxos some time ago, a few more here and there and now he is back with the original lineup of himself on bass, John O'Gallagher on alto sax, Tony Moreno, drums, and the by now rather well known guitarist Rez Abbasi. They are joined by Glen Fitten, percussion, and Jon Werking on piano as needed. All on the new album Confluence (Innova 837)...

David writes well-conceived compositions and this album bears that out. They are diverse, harmonically-melodically-rhythmically lively vehicles for the sort of sophisticated jazz-with-rock-heft style the band does so well.

There is a strong improvised component to this band as you might expect. Rez Abbasi sounds as stunning as ever on guitar, whether it's developing a line that has its own east-west logic or getting some great chordal ideas in play, he is rapidly becoming a seminal force out there. John O'Gallagher has a fluidly cool-to-hot alto tone and improvisational ideas that work well within the compositional frameworks. There is a post-bop fluidity that he and Rez share and when they solo simultaneously it is quite wonderful for the kinetic excitement they generate together. Dave is an excellent bassist who does much more than standard background duties in this or any other of his albums. His solos are vibrant-toned lyrical gems. And Tony Moreno gets an excellent rapport going with him at the same time as he gives everything a subtle push. Jon Werking comes off sounding good in his solo spots as well. Glen Fitten makes some good sounds when called upon. And so that is the band. . .

It's all about a balance between jazz composition and group presence here. This is jazz-rock with a mind, so to speak. It is a beautiful combination of excellent players and compositions that suit them. Many stars for this one, if I had a star system (which I don't). Give it an earful.