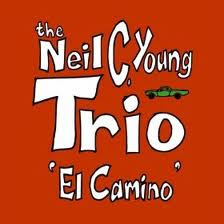 Neil Young? No, Neil C. Young. A different Neil Young but one that plays some interesting electric guitar (and Neil Young the first, so to speak, does that too in his way but it's not time to talk about that). This Mr. Young has gathered together his music, put together a nice trio with Alan Whitham on electric bass and Richard Young on drums, and recorded a CD, his new one, called El Camino (Canadian-American).

We have some nicely electrified guitar-based jazz-rock going on throughout. This is music that owes something to the classic Gary Burton jazz-rock sides and the guitarists who occupied the string chair over the years.

It has some good, progressive "blowing" tunes going on and Neil C. lets loose with improvisations that do distinguish him as original. He can and does come up with some nicely turned single lines but it's his chordal improvising that especially sets him apart. He has unusual voicings and a good percussive feel.

The whole album flows well and it keeps sounding good after a bunch of listens. So that means you probably should get it!! That is, if a new guitarist with his own touch would fit in with your listening plans. . .