Bryan and the Haggards, Merles Just Want to Have Fun, with Eugene Chadbourne 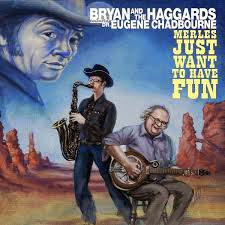 The new one by Bryan and the Haggards is a 100% hoot. Merles Just Want to Have Fun (Northern Spy 046) joins the "band" with Eugene Chadbourne on vocals and acoustic strings. If they were totally off the wall before, well, the wall just got even further away.

If you don't know it's a prime young group of cutting-edge jazzmen taking the music of good ole boy Merle Haggard and playing havoc with it. Bryan Murray takes on some of the vocals and plays various instruments, most notably his tenor; Jon Irabagon plays soprano, tenor, c-melody and bass clarinet; Jon Lundbom is on the electric guitar but also some banjo, Moppa Elliot takes the bass, and Danny Fischer plays the drums.

Underneath it all they truly have learned the songs, but then they work through some primo wacky trips that are both very out and supremely funny. The saxes and guitar work alone is totally bonkers. Yakety-insane! As I play this one I can't help but laughing. It's like Spike Jones meets Albert Ayler.

If you are not a redneck (or maybe even if you are) this is gonna tickle your being. In these hard times it's maybe even funnier because the promise of the pickup truck and boots philosophy seems farther away than ever from everyday reality, even if there are still plenty of turd kickers out there. But hey, this is so crazy that even those cats may see the humor?

You want to laugh? This one does it!