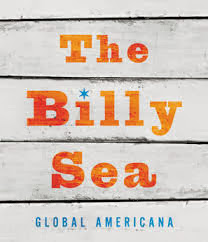 Master of the dobro slide guitar Billy Cardine may not be known to you but he should be. I've covered two of his disks here and now a third, in a slightly different stylistic universe than the other two. His group the Billy Sea is Cardine with the very nice rhythm team of River Guerguerian on drums and percussion, and Jake Wolfe on electric bass in a program of electro-acoustic prog-fuse-jazz-rock that's notable for an organic rootsiness and some great guitar. And by the way, Jake can really play the electric bass, solo and otherwise. He does. Nice drumming here, too.

They have some Indian roots from time-to-time which they combine with a folksy demeanor (e.g., "With A High Hope") and otherwise run a full gamut of stylistic fusions with originals by all concerned, five by Cardine.

All this on their CD Global Americana (self-released), which however ironic really does fit what they are doing.

It's masterful and engaging music, all instrumental with the exception of "Stars in Still Water", a pleasing song with vocals by Mary Lucey.

All I can say is--you miss this one at your own peril. He should be heard by anyone who ever contemplated picking up a dobro or just loves to hear one well played.