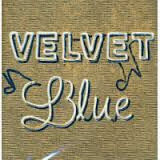 When it's time to get down to the nitty-gritty, chances are you'll hear it coming out of Chicago (as well as other places of course). Chicago has been synonymous with great jazz and blues for as long as you can say such a thing of anyplace. King Oliver came up North way back but the foundations were no doubt laid for him and it's been going great ever since. Is it those cold winters, the hot summers? I don't know but it's Chicago-style cold all over the country right now and the CD on my machine helps me through the local version. Of course when I lived in Chicago for a while I understood. I felt the music like I felt the seasons there, more so than when you aren't THERE, man. And I carried that back with me to NY Metro. Once it's in you, it doesn't leave and you don't want it to.

So today we get some Velvet Lounge style avant soul jazz from cats who have been there, are there, will be there. It's bassist Harrison Bankhead and his quartet on a fine disk rightly titled Velvet Blue (Engine 2013). Harrison is a bassist (upright) who has strength, soul, chops and an ear to take it anywhere. His band is one you'd be glad to catch live because it has presence, it does it and it feels it moment by moment.

We are talking about the under-appreciated killer reedman Ed Wilkerson, here on tenor, clarinet, alto clarinet and a little didgeridoo and harmonica. Another reedman who is hot and needs to be better known is on hand too, Mars Williams, on alto, tenor, soprano and kalimba. The fire-stoking drummer who kicks them ahead is Avreeayl Ra and he puts the boilers under everybody to get that steam cranking.

The two-reed team work together very nicely. Each has his sound so you can follow the two weaving in and out with each other and with the rhythm, with Harrison and Avreeayl, switching off instruments. Somebody plays a piano at one point, and it sounds good in a harmonic tremor of Alice then McCoy-Alice block chords sort of way but not exactly. I am thinking it's Harrison? Breaks it up nicely.

It's a set that goes in plenty of directions and gives you dramatic contrasts. And in the end, yeah, you want to go hop a freighter to Chi-town or a bus or whatever and go inside that old Velvet Lounge and while away the night with the sounds. It's better than a Yule log because it doesn't just sit there and crackle-fizzle. It does what you need it to do to heat your inner-space! It is on fire but it's the good kind of fire.

Barring that trip the next best thing is catching this disk. It's real-deal Chicago freedom in concentrated expression, new jazz of high level cats. Many stars, many stars. This will warm you up! Grab a copy.