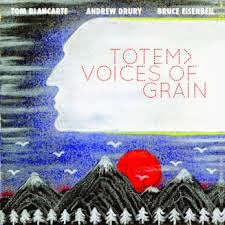 I've been following and listening eagerly to the evolution of guitarist Bruce Eisenbeil, more or less since I first started writing for Cadence (and then left there to do my own music blogs). I've reviewed a good number of things, dates he led, etc., (type his name in the search box at top for those reviews). I must say that on the new Totem> album he has taken a giant leap forward.

The album is Voices of Grain (New Atlantis 007).

This is a three-way effort that achieves liftoff by the extraordinary interaction of the trio playing here--Bruce on electric guitar, Tom Blancarte on acoustic bass, Andrew Drury on drums. They put themselves in very all-encompassing musical hotspots by both listening and going in three separate yet synchronous directions. Andrew Drury is the ideal, idea drummer for this date. He listens but he also contributes tumbling energy music figures that would sound great even if it were just him. He has the ears, imagination and executional ability to make all the POP.

Then Tom Blancarte on bass--he is a dynamo here. All over the place with real intensity, imagination, too, and a sense of tone that combines excellently with Bruce's guitar wizardry.

So yes, Mr. Eisenbeil is right there with the other two. His playing has grown to the point where he may be out in sound color like Derek Bailey, percussive like Sonny Sharrock, dissonant and extra-tonal like both, but there is a memorability to what he plays, an out melodic sense that rings out yes, but with an overall sound-sense that combines with musical content for an approach that's original and very captivating.

They are free flowing throughout, sometimes edging into almost-heavy-rock but then taking it out in ways that perhaps the Fillmore crowd would have had to adjust to. Totem> goes to places that words do not cover very well. Because it's about the sound, not the words. But the places they visit are out in interesting ways and unusual enough to state categorically that here we have a trio of real originality.

Three masters take it out with kinetic electricity and power...and the results are vital. Take a leap and listen to this one! It will put you elsewhere.

Posted by Grego Applegate Edwards at 10:52 AM