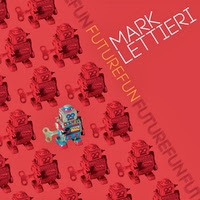 Mark Lettieri? Good guitarist. Electric. Plays a prog sort of jazz-rock on his new album Futurefun (self-released). He's got some nice rythmic sensibilities and can come out with rapid-fire lines that end in a bluesy-rock territory but can get there in various ways, and he doesn't quite sound like anybody else.

It's a trio-quartet setting and a platform for Lettieri's good sense and interesting written launching pads. It's beyond cliche and it shows you what he's got, which is some chops but a musical mind that works in ways that make the music worth hearing. It's not technically astute fireworks in the end. It's music.

Here's a cat that's got something really nice going!

Posted by Grego Applegate Edwards at 7:31 AM