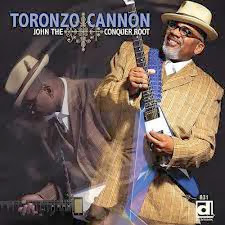 Anybody familiar with the history of blues and rock knows that somewhere towards the late sixties the sound of the lead guitar in rock expanded and electrified greatly, thanks to artists like Jeff Beck, Eric Clapton. Jimmy Page and of course Jimi Hendrix. Each one of these artists had strong blues roots to their playing and each had listened carefully to the Afro-American urban blues styles of guitarists like BB King and Buddy Guy among others, and they took it forward from there.

Well now of course somebody like Buddy Guy was in many ways right there himself. I remember hearing him open for the Mothers of Invention in 1967 at the Central Park summer festival and I felt the convergence.

Toronzo Cannon, a living, breathing, very much on top of it bluesman on the Chicago scene brings us some of that very hip electricity on his second album, John the Conquer Root (Delmark 831). It's Toronzo as very together guitarist, soulful vocalist and blues songwriter with a good poppin' band and a bunch of hot tunes.

When he wants to crank it--the solos have that classic edge that Albert King or BB or Eric could conjure back in the classic days--or of course Buddy Guy. And some of the other tunes have a soul feel or "just" classic Chicago blues style, as if that isn't enough? Well it is much enough!

This is one hot disk. Dig in by all means.

Posted by Grego Applegate Edwards at 8:00 AM