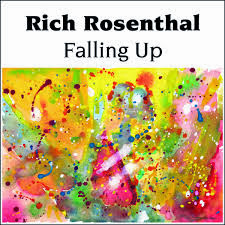 Rich Rosenthal's album Falling Up (MSK 301) has real bite to it but also enough bark to warn you to pay attention. It's in a free-ish jazz zone without necessarily getting completely into the fire music aspect. The electricity and energy of Rosenthal's guitar has enough jolt that there is a near-rock edge, the compositions are well thought-out, the solos are hip and the rhythm section cooks with an easy sort of lope or undaunted determination, depending.

All compositions are by Rich save for Steve Lacy's "No Baby" and Jimmy Lyons' "Wee Sneezawee" (both good choices, underperformed in the repertoire). Rich is joined by the "talent-deserving-wider-recognition" Joe Giardullo on soprano. Then there's Craig Nixon on upright bass and Matt Crane at the drums.

Rich solos with an outside edge, sometimes with a kind of deliberation that works well and is a little rare in this kind of guitar style; at other points he swings for the musical fences and connects. He picks some hip chord voicings and can wind a phrase in ways that take it to the edge and keep your attention. Joe is someone to hear too, as always, and sounds well.

It's a disk that goes from station-to-station without flagging. It's a very nice guitar effort and it's equally cool on the group togetherness end.

Posted by Grego Applegate Edwards at 6:37 AM