Crosby-Stills Nash & Young, Fifty by Four, Half A Century of CSNY, DVD 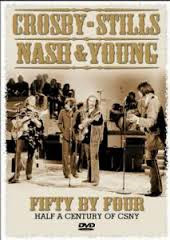 Time creates the future. This is obvious on one level, but not on another. Crosby-Stills Nash & Young were about as big as anyone could be between 1969-1971. You couldn't walk down the street, go anywhere or do anything without hearing their music--from the first two albums. I for one got about as fed up hearing it then as I was with anything else musically. Yet now I can listen again and truly appreciate how good they were. I suspect I am not alone. Here we are 40 years later. 50 years into their careers. What happened?

A DVD is out that gives you a comprehensive view of the group, their roots and the chronology of their ups and downs: Crosby-Stills Nash & Young, Fifty by Four, Half A Century of CSNY (Pride DVD 168).

There are 165 minutes to the main section plus some extras, so there is a lot to digest. The Hollies, Byrds and Buffalo Springfield form the backdrop, and then the advent of folk-rock and ultimately the joining together of CSNY and so on. It fills in gaps, gives you an overview of the volatile personal conflicts and situates the music in the general scene.

This is in a way typical of these kinds of "unauthorized" bio-DVDs, but it also is especially good at clarifying CSNY's musical, cultural, social points of view as a model of the era. There are harrowing moments, such as Crosby's descent into substance hell, moments when their strong personalities put the entire operation at risk, and some joyous moments that made it all worth it.

Anyone with an interest in the period will get something from this DVD. Well-done!