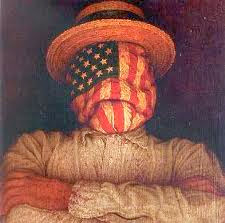 Cutting-edge rock today flourishes where the popular top-40 version struggles, in terms of its presence on the pop charts compared to decades ago. It no longer dominates the lowest-common-denominator realms. But in a way following in the footsteps of the evolution of jazz, the art form of rock is alive and growing, as I've tried to show on these pages when something comes along that warrants mentioning.

Another such something is up today. For your consideration (as Rod Serling used to say), the power trio Dreadnaught. Their album The American Standard (Red Fez Records). I believe this one goes back to 2001 but it in no way sounds dated.

The line-up is Richard Habib on drums, Robert Lord on electric bass and Justin Walton on electric guitar.

What struck me as I listened was the pleasingly elaborate interplay in the arrangements for all three players. They lock together with multi-sectioned notefulness that does not have a machine-gun fusion feel so much as a through-composed brilliance that still has the hard edge of rock. In that they are not at all the expected. They are a pretty rare thing--pristinely original prog-metal artists-composers.

They bring in various guests to extend the sound but the trio is continually in the foreground. They have an effective and interesting solo presence in guitarist Justin. He is no slouch and when he solos it is of a piece with the ensemble sections--bright and unexpected.

There are vocals and they do the job well enough without being spectacular, standing-ovation flag wavers. But the band does tend to fall into a kind of post-prog feel with the extended song forms they unwind at those points in the program.

The music intrigues. It is in its own way outstanding--and the post-prog crowd who favors excellent power trio arrangements should gravitate towards this one. In its own way something to hear, most definitely!