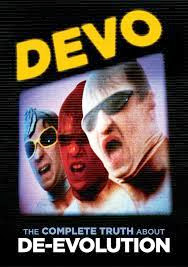 The myth out there is that the '60s were totally key to Euro-American culture, especially for music. That's fine. But there are those who either remain silent about the '70s, or actively claim that the '70s were retrograde, destructive or somehow backwater. The fact is that the '70s musically played out some of the implications of the '60s and took new turns into artistic-semantic territories as well, whether it's in rock, new jazz or avant classical. It was not obvious because much of what was good was on the fringe of media coverage, even then, and not always well-known to most. But it was there if you looked for it.

I wont touch the larger issue of "everything" here on a Monday morning. I'd never finish. But only looking to rock there was much going on. New Wave in my experience then was personified by Talking Heads. Hey they did much and I am a New York sort of guy so it was natural that I was hipped to them. Frankly what I knew of DEVO was in the context of all the other things we were bombarded with then--which, looking back, was partly their fault. Anyway "Whip It" I did not get. Their videos, or what I saw of them. . . I didn't get.

I watched the DEVO DVD The Complete Truth About De-evolution (MVD 6054D) in two evenings (there's a lot to digest) lately and I GOT IT! DEVO were a new wave outfit that in different ways were as artsy and, hmm, as subversive as Talking Heads. Just in different ways.

The DVD puts together twenty of the their best videos (with the music obviously) along with optional narrative by key group members, an interview with their video creating partner-collaborator Chuck Statler and a bunch of extras.

The point of the group was that they reflected Mid-Western Middle America as much as Talking Heads represented the NY Metro-Burbs. DEVO was all about American normalcy in the '50s-'60s-'70s as a kind of retro-futuristic nightmare dystopia. Humans were de-evolving is the theme, as shown in that fantastically dada ridiculousness of the band itself and the entire backdrop they so effectively created in their videos--which watching now I see they were poking fun at rock-pop itself and their audience, making a meta-mockery of rock-pop significance in the face of the great hype-creating machine. What's perhaps doubly ironic is that the imagery and feel of their videos were widely imitated in the later flowering of MTV's peak era, and even today.

The music is almost secondary, though it doesn't sound as dated, if you will excuse my ironic slippage, as some of the more seminally toted groups of the time.

All I can say is that if you watch the videos in sequence and then listen to the commentary by band members a second time through, you will get something that might not have been obvious then. The Evil Clowns mega-metal group sarcastically referred to in one of the videos was all too alive and real then. Big money was running much of the scene and DEVO made fun of the whole empire, which is still with us I suppose, only it's even more superficial than it was. The days of video for a short while were wide open enough that DEVO could slip into rotations and the so-called counterculture still had a presence in the media. Not now.

And that's why you should see this today.

Posted by Grego Applegate Edwards at 8:10 AM