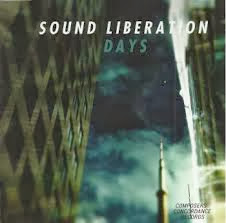 Gene Pritsker's Sound Liberation holds in a kind of stylistic liquid suspension rap, hip hop, r&b, rock and modern composed classical elements. The new album Days (Composers Concordance 0013) continues the development we've heard in the earlier albums (type the group's name in the index window box above to access the other reviews). The voice of Chanda Rule is back, thankfully, because she is really good. And Gene's song-compositions are ever-strong. There is no flagging.

So we have songs adapted from Gene's operas, mostly Money but also The Varieties of Religious Experience, we have the single cuts Sound Liberation came out with a while back, "Days" being especially haunting.

It's rap that gives you a streetwise view of life in the rough--well rhythmed, worded and articulated by Gene himself and David Gotay (who also plays cello here!). It's hip hop in all you imagine. Gene adds heft with his guitar and there is a small string ensemble and other classical-associated instruments that give you another world yet it's all the same world, at least where Sound Liberation is concerned.

It all hangs together in ways you remember as you listen a few times. It's not just that things are combined that don't ordinarily come together, it is that they do so with a musical result that grabs you and does not let go.

It's probably their very best. Pritsker and Sound Liberation go where nobody else goes before, like Star Trek only we ARE in space now, in a very personal space, all of us, seeking community. You can find it in this music. Check it out!