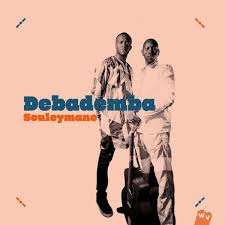 Debademba has some very hip Afrobeat-and-beyond sounds going for it. We take a peek at their second album Souleymane (World Village) today. It's contemporary Africa at its very best. Abdoulaye Traoré from Burkina Faso plays guitar like an angel, with all that the instrument has evolved into from both a rhythmic and a line-building viewpoint. He is countered and seconded by the finessed and driving soulfulness of Malian singer Mohamed Diaby.

Together with a crack band they fan the flames of groove on Souleymane. In a way Traoré does with the guitar what West African kora harpists have done in the past with their instrument--but not exactly because he does what a guitar player does, only he taps into that larger context of kora and lute-like instruments and how they do riff and go well beyond riffing at the same time. It's there, transformed and made newly original.

This is magnificent music--grooving with heat and smarts!