Will Lee, Love, Gratitude and Other Distractions 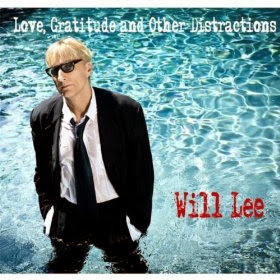 Will Lee. The bassist. The bassist you probably first got to know as part of the Late Night Band on David Letterman? He's been busy in the studio and has a nice album after a somewhat lengthy silence: Love, Gratitude and Other Distractions (Sinning Saint SSLOI7).

It's his first album as a leader in 20 years. And it gathers a pretty impressive cast of sideman, including Pat Metheny, Steve Lukather, Billy Gibbons (ZZ Top), Peter Erskine, Steve Gadd, Narada Michael Walden, Allen Toussaint, Paul Shaffer, you get the idea.

The album is a game combination of nicely reworked covers, pop and progressive originals (and some remind me pleasantly of Steely Dan and the Police, but in a vague sense) with Will singing in an engaging way (he's good), of course playing the electric bass like he does so well and everybody in excellent form.

His parting bass solo on the old standard "Smile" is something else and it all works. Hard to believe he was the bassist on one of my only two early recording sessions as a player-producer-arranger around 1975. I doubt if he'd remember it. He's come far!! Nice album!