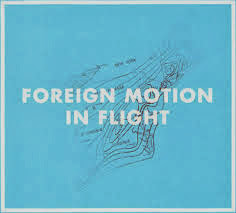 Foreign Motion is a band that plays an advanced sort of fusion that reminds just slightly of Tony Williams and his second major Lifetime lineup with Allan Holdsworth, meaning there are chops and there are smarts.

The band has an album I've been checking out called In Flight (self-released). Cory Wong is on guitar--and he has technique a' plenty and ideas that are interesting to go with it. Kevin Gastonguay is on keys and he has a funky post-Tyner post-Herbie H approach that works just fine here. The rhythm section holds up its end with some power. Petar Janjic plays some driving and busy drums. Yohannes Tona gives us electric bass that punches when it should and he can do a funky chops-laiden solo that has soul. So all is right here. These are young guys who have been around a bit and their union is a fortunate thing.

If there are moments that give us a kind of funk we have heard a good deal of, just wait and something cool will happen. The composition-arrangements will change it up and refresh it. Or Cory will blast out with something.