Dave Askren, Jeff Benedict, It's All About the Groove 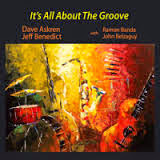 I listen to so many CDs every month. Some immediately disqualify themselves as not-yet-ready-for-prime-time, some seem formulated to appeal to a certain radio audience, people who look for something that I do not find interesting, and so both categories of music don't generally find their way onto these blogs.

Beyond that I appreciate anything well-played and well-meant and that certainly includes the CD up today. It's All About the Groove (self-released) features a co-led quartet that spotlights guitarist Dave Askren and alto saxist Jeff Benedict, two players into a straight-ahead jazz thing that is well-considered and always swinging.

That is in part thanks to the rhythm section of John Belzaguy on bass and Ramon Banda on drums, who do a nice job keeping the groove very together.

The arrangements are cool. There is a mix of standards and hip blowing tunes. Askren and Benedict have a limber solo ability that brings on the grits and gravy and a little brain salad, too. They swing and think on their feet.

So will this one change the world? No but these are very good players and they have an infectious joy to what they do. Everybody with a head for this thing will dig it. But then guitarist Dave will turn around and smoke you in the process (dig some of the chordal things he gets into, for example), as will Jeff.