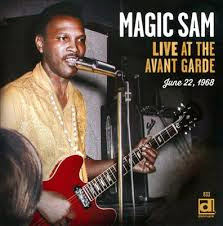 The great Chicago bluesman, vocalist, guitarist and purveyor of his very own brand of soul blues, Magic Sam. He hit the limelight then passed away suddenly, tragically. It all happened so fast that most people dug him (outside of Chi-town) only after he had left us. As time goes on that is ever more true, with those alive who saw him in the local clubs now a small minority compared to his international fame and following.

We are lucky that he was captured live in his element more than a few times. And we are lucky to hear one from June 22, 1968 that to my knowledge has not been available before, Magic Sam Live at the Avant Garde (Delmark 833). This one has it all, that live feel that makes the blues fly in Chicago, then his band captured well in decent sound. His guitar is in full flight, as are his vocals. This date may have been in Milwaukee, but Sam brings Chicago with him!

This one has a very nice mix of Chicago blues classics like Bobby Blue Bland's "Don't Want No Woman", Muddy's "Hoochie Coochie Man" and Magic Sam's own specialties.

It's a hell of a nice ride. Sam sounds as good or better than ever. He did more with a guitar-bass-drums trio than many did with a much fuller outfit. And that was great because there was all the more space for that screamingly supercharged guitar of his.