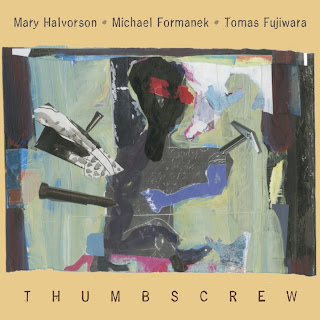 Guitarist Mary Halvorson has cred out there that is deserved. She plays in her own avant garde jazz style and has been doing so for some time. She forms one-third of the trio called Thumbscrew, whose self-titled album came out earlier this year (Cuneiform). Mary joins up with bassist Michael Formanek and drummer Thomas Fujiwara to make a very potent combination.

The album features compositional material freely treated and that puts it all in a more ambitious context than a free pickup date might have.

The album shows off all three and their special ways of putting themselves across. It also has a real group dynamic going on between the three.

If I am a little behind posting on it that has nothing to do with worthiness. This is a goody. Any serious student of free music/out jazz and the modern guitarist, bassist and drummer should give this one a spin.

I hope they continue their association for a long time to come. In the interim there is the debut album. Listen to it if you can! Oh, I should mention they are on tour in Europe and US through September, 2014. Look them up on the net to see if they are coming to your zone.