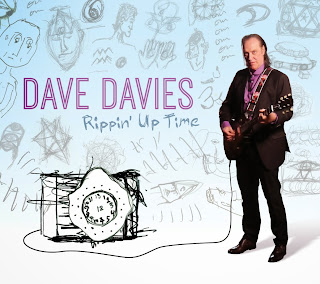 There was a point when the Kinks and their lead guitarist Dave Davies changed everything. I can still remembering hearing "You Really Got Me" on the radio and/or Shindig and how it hit me. Those power chords were so raw and primal. For my juvenile self it was exactly what I needed. "All Day and All of the Night" followed and I was a Kinks fan. That was it. Dave's simple power playing had as it turned out a germinal influence on the hard rock and metal to follow. The Kinks came out of the blues rockers, of course, and their early repertoire included tips of the hat to some of the greats, just as often with Dave singing the lead vocals on those as not.

Well now all these years later we are here and Dave Davies is too. He gives us a solo album Rippin' Up Time (Red River 157) that shows us he not only hasn't lost it, but that he's kept it and grown it. Ten songs, seemingly originals, grace the album and they have that elementality of hard early rock as experienced now. Dave's voice still has that bad-can-be-better-than-good if it's good raucous rawness. His songs sing of the old days and today. He's got a small band on hand that rocks it and Dave's guitar still has the elemental hipness.

There's nothing slick about this album and that's how it should be. Yeah! The first punks? I don't know. Who cares? Dave still sounds good.