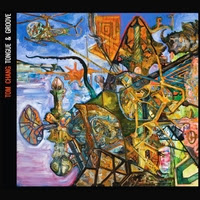 As always, New York serves as a potent breeding ground for new improvisational music, jazz if you will. Guitarist Tom Chang brings us a stirring example of the sort of combinations possible these days on his album Tongue & Groove (Raw Toast). He takes his own formidable compositional and guitar-wielding skills and forms around it a band of some heavy players. Chang brings in a potent one-two-punch reed section in Greg Ward on alto and Jason Rigby on tenor. He picks a rhythm section of equal weight in Chris Lightcap on bass and Gerald Cleaver on drums. Then he adds the world music influence of Akshay Anatapadmanabhan on kanjira and mridangam (South Asian hand drums), and Subash Chandran on konnakol (Indian rhythmic vocal syllabification).

The compositions are inventive, modern, freely articulated straight-eight swinging affairs that give good room for the improvisations and set up loose grooves that lope along with heat and torque.

The South Asian percussion contingent adds another dimension when present, but it all fits together as a modern, unified mostly post-rock-funk kind of open jazz. Everybody sounds great and Tom Chang shows how his guitar work synthesizes in its own way the advances that a rather electric guitar approach have made over the past decades. He wastes no notes and says much in compact solo spaces. That is true too of the reeds.

It's music of today, fused, open and complicated by nice twists and turns.