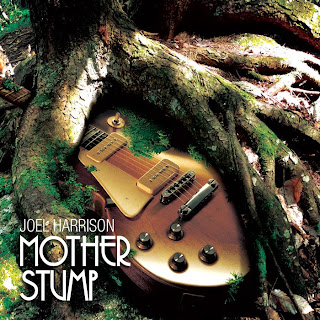 Joel Harrison is a guitarist I've been following over the years, beginning with a review for Cadence a pretty long while back. I've missed things of his I am sure, but he seems to be playing ever more cohesively in recent times. You can hear some very good things on a recent album of his, Mother Stump (Cuneiform).

He's been thinking about his roots more lately, and this album reflects a kind of summing up of what has made him what he is today. The album puts the emphasis on hitting it with compositional material playing a lesser role. Most of the music is in the form of covers, an eclectic mix that ranges from Luther Vandross, Paul Motian and a spiritual to George Russell and Leonard Cohen.

The music comes to us in quartet or trio format, with good contributions from sidemen Michael Bates (bass), Jeremy "Bean" Clemons (drums), and Glenn Patscha (keyboards).

But it is Joel who makes it all exceptional with a full-fledged smartly soulful psychedelic jazz transparency that varies from track-to-track. He may go to the slide for a down home southern blusiness or he may create drifts of soundscapes that layer atop a rocking rhythm section. And just about anything in between. There is as much variety of rootfulness as the mix of songs would indicate. And yet there is always Joel with a sense of balance directing things forward.

When the music is done you are left with the feeling that Joel Harrison is in many ways a complete artist, not a bopper but someone who has put down roots in an alternative vision of lineages. You won't hear Wes Montgomery rechannelings (and I am not ragging on that either) so much as you will hear the electricity that came into guitar playing from blues and rock and combined with the notefulness of the jazz sense.

For all that this is a very good record. It gives you a better idea of where Joel Harrison has come from than perhaps any previous record, yet it gives you also where he is, right now.

It makes you want to hear where he is going to go next. But it also satisfies the lover of really nicely done guitar playing. He is a consummate artist and he shows you why on Mother Stump.