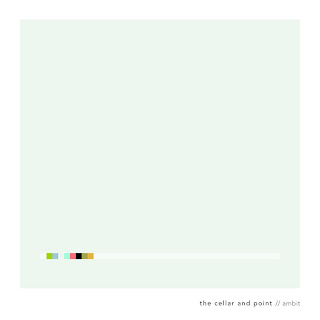 The Cellar & Point is a "garage chamber" DIY group headed by Joe Branciforte on drums and Chris Botta on guitar. They show some very fascinating progressive ways on their recent album Ambit (Cuneiform). They make notable use of the studio to create a sound that sometimes reminds a little of Zappa's later synclavier works in the combination of new music, rock and jazz elements, but not so much an imitation as a lineage affiliation. They bring in some very capable group members in guitarist Terrance McManus, violinist Christopher Otto and cellist Jack McFarland (both members of the JACK quartet), vibraphonist Joe Bergen (founding member of the Mantra Percussion ensemble) and studio bassist Rufus Philpot.

They do some hefty avant rock covers of Ligeti and Webern as well as compositions of their own, both very advanced and driving. They get a sound that is of their own make, distinctive yet in the edgy new prog avant zone. There are some very hip guitar solos, some combustible drumming and much ensemble uncanniness that keeps your ears on full alert at all times.

Some of the music has an ever-shifting accent-meter funkrocking with layered ensemble patterns and variations. But everything they do has not only credibility but real brilliance.

Anyone who digs the new music-avant rock nexus will find this a beautiful example. I once again am impressed with Cuneiform's continued commitment to that netherland of music between borders that shows us the health and forward moving nature of new electricity.