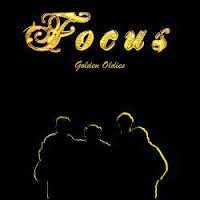 If you were there, then you probably still are. I refer to 1971-2 when the Dutch group Focus hit the FM airwaves with their prog-metal classic "Hocus Pocus." It was a song pretty ubiquitous (everywhere) then. I must say I liked it well. Time went by and I all but forgot the impact that the song had on us, many of us.

The band went on to do more excellent prog-metal things but I was preoccupied more with jazz and new music so I missed much of it. The band went its separate ways in 1978, but reformed in the new millennium. Guitarist Jan Akkerman was gone but original member organist-flautist Thijs van Leer was on hand with a quartet that included Menno Gootjes on guitar, who turns out to be quite good.

This year the newly constituted band re-recorded their biggest hits from the original days, Golden Oldies (Island Out of Focus Records), and I've been listening. Of course "Hocus Pocus" is there along with eight other gems.

I must say that the band sounds great, the songs still come across as vital and this all makes for a corkingly good album.

The sound is vivid and the band cranks it out like yesterday was today, which in some ways it still is. I recommend this one if you were there or even if you were not. It's excellent music.