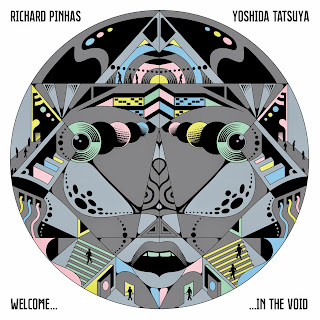 Today we have music that complements well the recording I reviewed on this past Friday. It is again guitarist Richard Pinhas, this time in tandem with drummer Yoshida Tatsuya, for an album-lengthed soundscape called Welcome in the Void (Cuneiform). Like Friday's Tikkun it features Richard's looped-guitar soundscapes, again uncanny space explorations of infinite sustain, a post-Frippertronics spectacular. This time a second guitarist is replaced by the energetic space drumming of Yoshida Tatsuya.

As before this is music of great cosmic plentitude, a droning, blazing collision of like-minded sounds. I like this one no less than Tikkun, though perhaps that one has an even more impactful jolt because it is a larger wash of sound at times--at least in terms of having two guitars, sequencer and drums.

But that is in no way to take something away from this one. It is a definite winner. If you had to start with just one, I would go first with Tikkun. But then it is most certainly a good thing to have both.

Posted by Grego Applegate Edwards at 5:55 AM