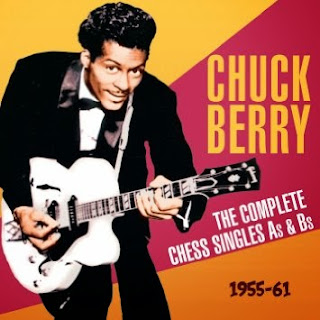 Anybody who knows the history of rock knows how central Chuck Berry was in the development of the music. And in the beginning, it was the singles that people heard. They remain central to an appreciation of his art and the impact it had, both in the US and in England.

So the new, specially priced 2-CD set, The Complete Chess Singles As & Bs, 1955-61 (Acrobat Music 3122), is especially important and revealing. You get the big hits "Maybelline," "Roll Over Beethoven," "Rock and Roll Music" and such, but you get B-Side gems like "Reelin' and Rockin'," "Around and Around," and "Memphis, Tennessee." There are blues and r&b numbers, guitar instrumentals, and a few minor things that remain fascinating. Back then the rock listeners were far more likely to purchase 45-rpm singles than albums. This is what they heard.

And if you know the British Invasion and what the Stones and Beatles (along with others) did to revive Chuck's stature after his prison experiences and the temper of the time began to favor white crooners and less vital pop, you get a bird's eye (or rather ear) view of the music that the next generation of rockers had imbibed. It's incredible just how many of the songs on this set were covered by rock bands in the '60s. I can count much more than half. And rather than the Pat Boone insipid lameness that white '50s covers of things like "Tutti Frutti" entailed, the British and American bands covered Berry with a mostly real understanding and fire, so that his career took off anew and his reputation grew to a new peak that never diminished.

So to hear these original tracks now is crucial to an understanding of it all and how revolutionary was his sound. Of course the guitar style he introduced became fundamental. He combined blues guitar with r&b shadings and came up with his very own way. Listen to it develop as the chronological sequence of the tracks nicely allow. His vocals were just as important. His occasional near rap rapid signifying patter hit the music world like a storm. And he had real soul that along with Little Richard set the vocal pace for what was to come. Listen to to the bands here. The original sides sound a bit sparse and open with Willie Dixon's upright bass, cats like Otis Spann playing a LOT of piano and Fred Below slapping a back beat that left no doubt where the rocking was going. By the later years of this period, there was a fuller sound that often included rhythm guitar and electric bass. Of course that sound carried over into rock afterwards, but the early sound had bluesier roots, a feel that Chess sides generally favored in the early days.

In all this is an essential document for all rock-rooted students. You can learn much from Chuck's guitar playing, the sound of the bands and of course his classic songs and vocals. The digital transfers sound good, so there's no reason to hesitate on this one. Essential.