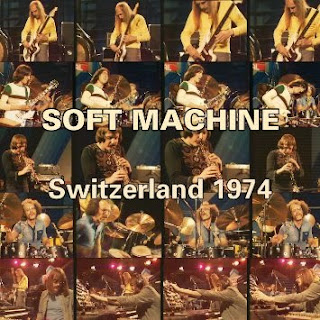 The legendary Soft Machine could hardly be said to have gone "soft" by 1973. Quite the contrary. Yet when guitarist Allan Holdsworth joined the band that year it gave the group a big boost and added a decidedly articulate new voice into the mix. They had up until then managed to carve a most distinctive sound by placing keyboard wizard Mike Ratledge into at times the role of the guitar soloist in the band and it worked very well indeed. Yet after seven albums and a great deal of wonderful music, there was a point where someone of the extraordinary caliber of Holdsworth, a one-in-a-million guitarist of genius, would give the band another sound shading and provide some new life. So they were fortunate that Allan was available and set about creating a new repertoire, much of which was included in their eighth album Bundles, another milestone recording for the Softs that was timely and of course well-received.

In the band at the time was Mike Ratledge, the only remaining original member, along with piano-saxman Karl Jenkins, bassist Roy Babbington and the potent John Marshall on drums. In tandem with Holdsworth they had a great deal of depth and versatility. Bundles showed that very much.

Now we have the treat of hearing the band live at Montreux, on the previously unreleased Switzerland 1974 (Cuneiform Rune 395/396) in a combo CD and DVD package.

The sound is pristine, the music complex and energized, and Holdsworth most definitely at his best. What's fascinating is that Allan had very much the fleet facility of his mature days, yet his sound is rather different, not as violin-like as in later years. That gives you another take on what he is playing and no the less interesting for it.

The music has it all and the band by then was in top form.

Of course you should have Bundles if you are a serious student of jazz-rock and fusion. But this live date has the spontaneous looseness and fire you get less of in the studio. The rhythm section kicks it hard, Ratledge and Babbington weave magic, and Allan Holdsworth gives notice to the world that he is a world-class player.

Copy this url into your browser to stream a nice excerpt: https://cuneiformrecords.bandcamp.com/album/switzerland-1974