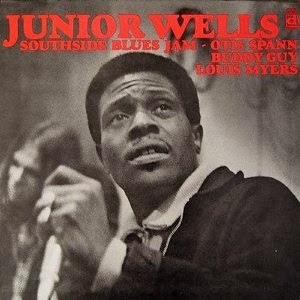 When one of the very greatest Chicago blues recordings arrives at your door, and you already know that because you had the LP, it is cause for joy.

I refer to Junior Wells and his album Southside Blues Jam (Delmark 628). Junior was an artist who had major label exposure by the time he waxed these sides in Delmark's studio in 1969-70. The big labels expected some blues "product" and chart success. Delmark was glad to record him again, because they dug him. They liked it when has was doing the blues the way he'd do it at the Southside clubs, raw, soulful, every song a story that is meant to communicate right to YOU. There is Junior on vocals and harp, the two-guitar punch of Buddy Guy and Louis Myers, the piano of Otis Spann, Earnest Johnson on bass and Fred Below on drums.

The CD has alternate takes and extra cuts, and they all add to the cumulative impact of this direct assault on your blues soul. Junior is inspired and very loose, Buddy and Otis and the rest are totally there commenting and participating musically and otherwise, and damn if this isn't music that still sounds just as great, just as true, just as real and just as blue as it ever did.

The blues will never die when there's trouble in your life. I listen now after losing one of my best friends a week ago. He loved this album and his troubles did not last always, because, hey, sometimes you just die. That's the truth of the blues, that it might get better but in the end there is an end to it. Sometimes you are gonna be "walkin' from the bottom of the floor," as Junior sings it. Sometimes you aren't wanted in the very neighborhood you call home. And what do you do? You give out with every drop of feeling in concentrated blues form. And you tell that "old man" Mayor Daily he needs to KNOW about the blues. Yeah. He did.

That is what this is. It is so honest and true that it hits you like a Mack truck. Otis and Buddy pour it on and Junior gets truly worked up into a frenzied passion. You don't imitate this because this is IT. This is the thing that cannot be made into product. Because it's so damned real.