George Van Eps, Once in Awhile, with Eddie Miller and Stanley Wrightsman 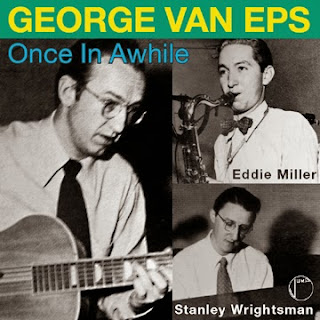 Every so often you catch up with a player who you never paid much attention to but it turns out is very worth hearing. Such a one turns out to be George Van Eps, a guitarist of the swing era who favored the chordal style of soloing. A reissue of the sides he made for Jump in 1946 and 1949, Once in Awhile (Jump 12-06, Delmark), turns out to be a real winner, both for Van Eps' tasteful guitar and his swinging sidemen.

With him throughout is the relatively unsung tenor saxist Eddie Miller, who sounds pretty great here, a kind of cross between Lester Young and Bud Freeman. Then there's the totally unsung pianist Stanley Wrightsman, who plays swingingly in a more-or-less Teddy Wilson bag.

Including alternate takes there are 25 selections on the reissue. A bass player joins the trio for a couple of numbers, a drummer for a couple, but mostly it's just the trio. You get a close look at the Van Eps style, which is quite involved and great to hear. And I must say Eddie Miller holds my interest too with his odd combination of vibrato and straightforward Lester-like purity. Wrightsman is nothing to sneeze at either.

The three combined give you some very classic sounding swing. This is music that delights from a guitarist you can learn much from. It makes me smile, the whole thing.

Posted by Grego Applegate Edwards at 5:47 AM