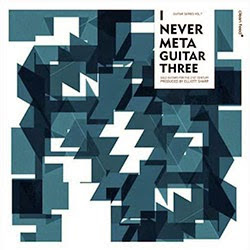 The avant guitar solo scene these days is eclectic and all-encompassing, as electric and soulful as Hendrix, as painstaking new-sound oriented as Derek Bailey, as focused and single-minded as Elliott Sharp. All this we can experience in I Never Meta Guitar Three (Clean Feed CFG 007), the Elliott Sharp produced-curated anthology of solo guitar in its third volume. The third takes up where volumes one and two leave off, with a new crew of guitarists; some who follow such things will perhaps recognize many names, others perhaps will be unfamiliar to many.

There are too many examples to cover individually here. Suffice to say that they all share a dedication to extending the sound color range and technical possibilities of the guitar today, from myriads of electrical transformations from effects and wattage to micro-tonalities and colors obtained via extended ways of sounding the strings.

It is another fascinating jaunt into the possibilities out there today. Anyone concerned with the guitar as a medium of new music sounds should explore this anthology. Even the merely curious will be rewarded with much to contemplate and appreciate on repeated listenings. This is what's happening NOW!