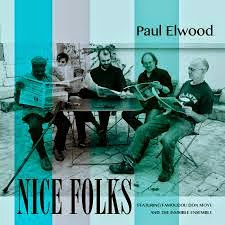 What a world we live in today, musically. Literally anything can be combined and is. And sometimes that combination is so successful as to take you very much by surprise, even by shock. Take Paul Elwood's Nice Folks (Innova 903). It is the sort of thing you first put on and the eyebrows start going up. After a while you are mumbling, WTF?! Or at least that was my reaction.

Paul Elwood wrote and arranged most of the music. He plays the five-string banjo and does it well. Neither like Bela Fleck on one end of things or Brandon Seabrook on the avant side, Paul goes his own way, having absorbed old-style playing as well as Scruggs claw-hammer picking style. He can take it way out or go string band traditional and all in the context of a large ensemble and vocal group. The Art Ensemble's Famoudou Don Moye is the drummer here and he is perfect. He KNOWs how to go everywhere at once and so is ready for the everything that comes, and he does his usual wonderful job putting something very Famoudou into the mix.

Paul and Kelsey Shiba are the principal vocalists. The band is eight people, Paul and Don, electric guitar, trombone, reeds and so forth. The band goes everywhere from string band to rock to avant jazz to old timey jazz, sometimes all at once.

And it works! It really does. There is a humor and seriousness that makes everything pop. And even if you weren't ready for this, you give it a chance and, wow, this is a real-deal hybrid that is bizarre but seriously good!

I am in awe. But you'd have to listen a few times with open ears and you'd get what I am getting. I can't give you more words because the telling is in the sound! Whew!