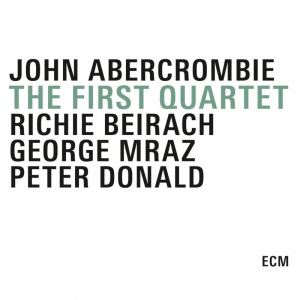 The coming to full stylistic maturity of John Abercrombie gave the world a guitarist that lucidly straddled the post-bop contemporary jazz scene with his own very original way. His work as a member of the Gateway Trio (with DeJohnette and Holland) was seminal, more fusion-rock oriented than what followed but filled with the fire of exploratory ways. Several solo albums came out after that, all good, but it was his formation of The First Quartet (ECM 3-CD set) with Richie Beirach on piano, George Mraz on bass and Peter Donald on drums beginning in 1978 that gave us the John Abercrombie of compositional brilliance and virtually uncategorizable improvisatory guitar playing. It was the point where it all gelled for him.

The three albums that came out in succession, Arcade (1979), Abercrombie Quartet (1980), and M (1981) have never before been released on CD until now and they are most welcome in the recently available ECM box set.

They mark an Abercrombie synthesizing the later jazz guitar contemporary lining and harmonic sophistications of a Jim Hall with Abercrombie's own sound and sensibilities, informed of course also by everything that came after Hall's peak period, including what John was up to before the quartet.

So very much these albums stake out a new stylistic claim, one very much in keeping with the sort of space-depth-jazz that ECM favored and created sound staging for so convincingly from the first, yet music very much Ambercrombian in its own right.

A key to this new sonance was the presence of pianist Beirach, who had already made quite an impact in David Liebman's group and had by then attained a harmonic-melodic beauty and modal-changes brilliance that suited where Abercrombie felt his music needed to be. George Mraz had the facility and imagination on bass that filled out the sound in all the right ways. And drummer Peter Donald swung the band in openly loose patterns that made the whole thing move forward nicely.

In the end this is a showcase for some very beautiful Abercrombie guitar and electric mandolin. He established a style with that spacy-pure tone and remarkable improvisational facility that had a rare combination of cool and heat. All three albums show him at his best, with Beirach a remarkable foil and harmonic lynchpin to the music.

There is a progression from album to album that came out of a natural development of playing together over time. The first album establishes the lyrical compositional backdrop and the improvising openness that would distinguish the group. The second increased the subtlety and impact of the pulsive momentum of the band. And the third built the lyricism outwards into more and more unified space-cosmos utterances.

It is most definitely great to hear these sides again after so long. They were Abercrombie's first truly definitive statements in the realm he has so fully occupied in the years that followed. They sound as fresh as ever.

Anyone who appreciates John Abercrombie should probably have these sides, surely, as anyone interested in knowing the important stylistic currents of jazz guitar as they developed outwards from this period. These are rather monumental statements on who Abercrombie was and still is. And that has much to do with where we are now, or a big part of it anyway. They are first-rate listens, too. Essential to hear and have if you can spring for it!