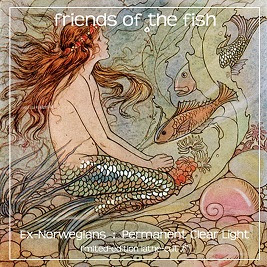 Permanent Clear Light I have posted on at length on these pages. It is no fluke as I consider the Finnish band the best neo-psychedelic song-oriented unit out there, the best thing since the XTC came at us in the guise of the Dukes of Stratosphear.

Permanent Clear Light is getting ready to release its new album this year. As a taste of that last December they came out with a single, "Corneville Skyline." It was released on a 7" vinyl slab named Friend of the Fish (Fruits de Mer), backed with Ex Norwegian's "It's A Game." Only 50 copies were pressed, so I guess there is no way of getting that--but I believe you can still find "Corneville" one way or another if you do a little Googling around.

I have not heard the Ex Norwegian tune but "Corneville" is everything you would expect from Permanent Clear Light. It is a song that of course could have come out back in 1967 or 1968. The psychedelic Beatles, early Floyd and any manner of other folks come to mind, yet this is NEW music. The arrangement has that spacy voluminousness of the classic era, a blend of what sounds like cello, guitar and the band at large, really just right, totally authentic but totally right now as well.

It's a great song and it only makes me look forward to the new album. Oh, I just realized, you can hear both cuts via a You Tune link. Copy and past this into your browser window https://www.youtube.com/watch?v=brxVUvJh0RM

It presages much good to come in the album. It is in itself a gas!!