Thinking Plague, In This Life 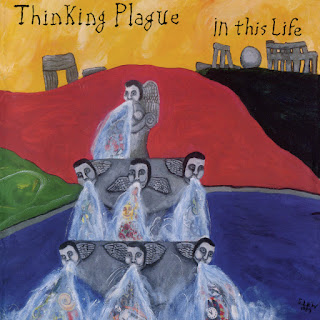 There are some bands so different and original that I find myself pausing. What to say? To start, we have today a reissue of the 1988-89 art-rocking album In This Life (Cuneiform Rune 407) by Thinking Plague, remastered and reissued on its 25th anniversary.

The band grabbed some underground attention with the album at the time. It was released in 1989 on Henry Cow's/Chris Cutler's Recommended Records as the band's third, part of the art-prog-post-rock-in-opposition movement. I missed it then, but hearing it today it gives you a timeless artfulness that most definitely sounds as fresh as ever.

The Denver-based outfit features for this disk Mike Johnson's wiry and very unusual compositions and the vocal tang and lyrics of Susanne Lewis for a standout set that sounds like nothing before or since, truly. Fred Frith makes a guest appearance on guitar but otherwise this is has electric and acoustic instrumentation and orchestration that does not classify so easily because it is so original.

It is song-form oriented with some very elaborate instrumental parts. I cannot say what it sounds like, because it sounds like nothing else. There are reed-guitar-key combinations that are uncanny, there are some ethnic-minimalist percussion and electronics, there is so much not easily described that I am afraid the hearing cannot be readily replaced by words--and that is pretty much one of the highest compliments one can give. When words fail, you KNOW something good is up. Or the very opposite. Here it is a matter of innovative excellence.

They are apparently working on a new album for Cuneiform. That will be something I'll look forward to. In the interim we have In This Life! Get it! Wow!