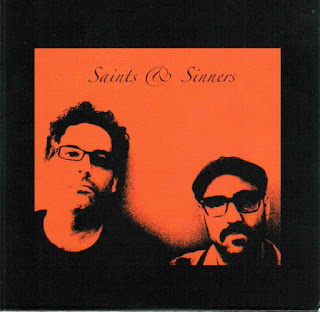 It is a treat to hear Terrence McManus on electric guitar and John Hebert on bass for a full album of duets. The album, Saints and Sinners (Rowhouse Music ROW01), captures a free-wheeling session of the two dating from 2010 but just recently released.

It gives you plenty of space to hear the freely creative twosome in a very inventive light. John Hebert is well-known out there as a bassist of power and imagination. We don't get a lot of him in such an exposed playing environment, and that is even more true of Terrence McManus.

It turns out that they were fully primed to get rolling on that recording date. The open-form possibilities are very nicely unveiled for this set. A tumbling, percussive/legato freedom comes into play and prevails throughout.

McManus reveals his considerably evolved outside lining, chording and sound-color sculpting prowess against a consistently invigorating backdrop of Hebert giving out with asymmetrical phrases that tumble forward to create a melodic-harmonic context advanced, swinging and well-thought out in the most spontaneous ways.

The two together let their creative intuitions flow for a full set. It is a refreshing result, two accomplished free improvisers getting maximum torque from the chemistry of the interactions.

We perhaps know Hebert's formidable capabilities, but then McManus comes through here as well to establish his own far-ranging imagination and an electric sound burnished yet cutting as needed.

This is high-powered invention, a duet that never flags and goes to a variety of interesting musical spaces.