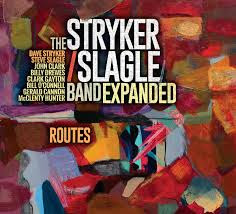 Dave Stryker (guitar) and Steve Slagle (alto, soprano. flute) have been making music together for a long time now. (See the May 31, 2010 posting on this blog for an example.) They come at us with a new, larger grouping on the Stryker/Slagle Band Expanded album Routes (Strikezone 883). It's of course Stryker and Slagle with Gerland Cannon on bass and McClenty Hunter on drums, plus horn virtuoso John Clark, and, for two numbers the tenor and bass clarinet of Billy Drews, for two numbers the trombone and tuba of Clark Gayton, and for three numbers the piano and Rhodes of Bill O'Connell.

The added girth gives them the chance to craft some fuller arrangements of original compositions along with a very nice version of Mingus' "Self-Portrait in Three Colors."

The added sound colors give depth to the music and primarily serve to set off the very formidable mainstream soloing clout of Styker's guitar and Slagle's alto. The rhythm section churns into swinging territory as you would expect while the co-leaders burn with some of their finest solo work. O'Connell gets some profitable solo time, too, as do others and nicely so.

It's the sort of album that carries on the hard bop and beyond roots of the music naturally and un-selfconsciously. And the arrangements are hiply lush.

It shows us that Dave Styker and Steve Slagle still have much to say and they go ahead and SAY it on this new one. It bubbles over with heated goodness and manages to find something new within the centered contemporary jazz tradition. Nice!