The Allman Brothers Band: After the Crash, DVD 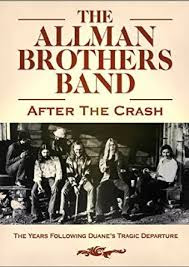 I covered the DVD documentary Song of the South: Duane Allman and the Rise of the Allman Brothers Band on these pages some time ago (type title into search box for that review). Now we have the sequel, The Allman Brothers Band: After the Crash (Sexy Intellectual DVD 585), which covers the band and its ups and downs after the tragic death of Duane.

Around 1971-2 many musicians I knew who were into an electric improvisational thing revered the Miles Davis electric bands then leading the way along with Mwandishi and a few select others firmly in the "jazz" camp. But many also revered the Dead, the Mothers and the Allman Brothers Band as parallel innovators in the rock world. Time passed and ultimately on the rock side the Dead and the Allmans managed to survive and resurge as part of what later became known as "jamband." But it was not at all clear then that they would last. On a good night either band could further the music and draw a large concert following, but it wasn't always that way, especially in the Allman's case.

This documentary DVD gives us a very decent, enlightened chronology of what happened to the band over those years. The almost miraculous recovery of the band with Dickie Best and Greg Allman presiding with strong songs and vibrant solo work is documented on the DVD with live footage, interviews and narrative.

There was a gradual decline in the band on an artistic level and waning popularity as Greg became estranged from his bandmates via a long relationship with Cher, a pronounced addiction problem and a controversial legal situation that involved Greg providing evidence against his personal assistant in return for immunity. Plus by the eighties, as the documentary makes clear, the guitar solo-oriented rock-jam sound hit an absolute nadir. Nobody wanted a "jamband" to fill their ears, blues had gone out of style, fusion and electricity were passe, etc.

The DVD does a fine job documenting those low points. They then cover in some depth the resurgence of the band, the discovery of young Maestro Trucks as guitarist following in Duane's footsteps and their subsequent rediscovery by a new generation.

Perhaps even more time could have been devoted to their latest period but there is enough the complete the narrative, surely. And their place in the jamband resurgence might have been made more detailed.

Nonetheless in all we have a fine two-hour documentary that will be manna for Allman fans and also enlightening for rock history buffs of a more general sort. It certainly kept my attention and gave me the big picture of developments that I never had the full scope on until seeing this. Well done!