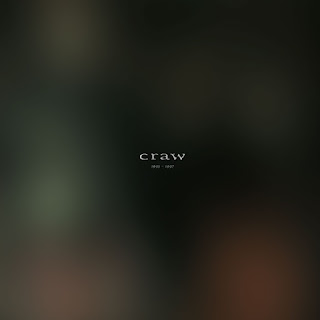 The world of avant rock sometimes seems like a party, or maybe a movie, that I had to leave in the middle of and came back a while later and...well OK, where has it gone while I was away?

The band Craw is maybe a good example. I have been listening to the three-CD compilation of their music 1993-1997 (Northern Spy NS070). It is a guitars-bass-drums-vocals band that I have not had the pleasure to hear much of until now. Wiki tells me "they belonged to the harder-edged branch of the math rock or post-hardcore movement." From Cleveland. Broke up around 2002?

OK, the categories mean nothing much to me. But hearing this three-CD set, which appears to be their first three albums, tells me they are on terrain I recognize. It is elaborate hard-core post-punk/post-metal. They start as a band that sound very manic and hyper, but somewhat familiar. By the third album they are completely onto something their own.

The "math rock" element, I get it, has to do with the complex coordinated segmentation of time they mastered. Much of it has an incredibly driving block-power sound that is strikingly asymmetrical.

You can hear the progression clearly. By the time of the third CD (Map, Monitor, Surge 1997) they have become an avant powerhouse wholly their own. The first two disk-albums give us the process and in themselves are fascinating to hear and livelier than some may wish--very edgy, extreme hard aggression, in other words. By the third album they are still edgy in the extreme, but have a tightness and total mastery on the domain they rightly claim as their own.

This music is not for the faint at heart, to say the very least. But it is fascinating, moving, hard-hitting and I would say an essential listen for anyone serious about the avant extremes of art rock and its development. Whew!