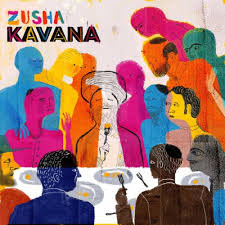 Hasidic reggae? Well, yes. Zusha does this on their CD Kavana (self released). It is an artful adaptation of Hasidic vocal style into a contemporary world. Shlomo Gaisin nicely handles the lead vocals, Zach Goldschmiedt is on acoustic guitar and vocals, and then Elisha Mlotek is on percussion and vocals. Add to that a very full band, courtesy of Mason Jar Music, turn on the recorders, and you have something very special.

This I believe is their second album. It proceeds from the idea that prayer is meaningless without "kavana," which translates roughly as "intent." This then is music of intent.

And it is quite entrancing in its ready injection of deep roots into a contemporary sound. To me that is very New York and something that makes the creative ambiance of the metropolis so productive--the continual intermingling of diverse roots in an unending creative conflation.

The melodies may be part traditional (I don't know enough of the Hasidic repertoire to say, though some sound familiar) but they come across in their wordless three-part harmonies as infectious, sincere, and compelling, and very timely in their universality of intent.

I am nearly at a loss for words except to say that this is magical music. It rings out artfully and convincingly. If you are open to something new in something old that speaks to us with an open heart, this one is for you.