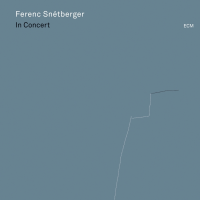 Who is Ferenc Snetberger and why should we care? To answer that fully is to explain why his first album for ECM, In Concert (ECM 2458), is well worth your attention. To put it simply, Ferenc is a nylon string classical guitar player who, like Ralph Towner before him, has absorbed the classical guitar tradition and applied it to a jazz-structural approach. Unlike Ralph Towner, however, he sounds like Ferenc Snetberger.

There are different elements that go into the Snetberger style. The album at hand gives us eight improvised pieces and a version of "Over the Rainbow." It is just Ferenc, his guitar, the acoustic excellence of producer Manfred Eicher, the very sympathetic aural setting of the Grand Hall of the Liszt Academy in Budapest, and a home audience (Ferenc is Hungarian) of listeners paying close attention and giving interlocking feedback energy to the performer as the best live situations can do.

He is a player of great finesse, a beautiful tone, a compositional and improvisational flair that is very sophisticated, very lyrical, and truly a milestone example of what the classical guitar-jazz guitar nexus can give us today. You first notice in the recital a pronounced flair for working in the Brazilian nylon string jazz idiom. He has great facility and just the right rhythmic approach to make the first part stand out.

But of course there is more. His lyricism may remind you of some of what you expect from ECM guitarists, yet it is also very much in his own right. There is always throughout the recording a feeling that Ferenc knows exactly where he is and where he intends to go. His household growing up gave him much of the Django tradition (he has Roma roots) as well as Jim Hall, Trane and Bird, and then in a kind of epiphany, Johann Sebastian Bach. Hearing Gismondi and Vasconcelos together gave Ferenc another sort of awakening as to possibilities.

The eight part suite that comprises the bulk of the album is dedicated to his home, Budapest. Much of the first sections are improvised, excellently so, before the main theme appears and is expounded upon. The influences and musical epiphanies of his formative period are all there as building block elements but then the end result is cut from whole cloth as the work of a mature, fully formed artist of inspired musical ideas and flawless technique.

I could go on but it is in the close listening that you will get all you need. Ferenc Snetberger is a major artist and this opening salvo of an album makes all that very clear. I suspect we will be hearing a great deal more from him in the coming years. In the meantime this is a very impressive solo album you will not want to miss.

A grand artiste is in our presence!
Posted by Grego Applegate Edwards at 6:46 AM