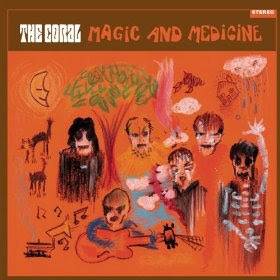 Concerned with the history of all musics and with what’s going on now, I always seem to have one foot in the past and the other in the future. So when a group comes along that incorporates earlier rock stylings with a contemporary outlook, I take notice. So a little more alt here with a CD released a few years ago.

I don’t know much of anything about the Coral. I was streaming a progressive web radio station when they played one of their cuts, which had a bit of jamming and I liked that. The CD turned out to be Magic and Medicine (Columbia) and it has a bonus disk of two of their earlier EPs. They have an attractive, rawly conceived ‘60s-meets-today sound. The tunes are not especially strong, but instrumentally I like what they are doing. I wonder where they will go from this?
Posted by Grego Applegate Edwards at 4:20 AM